These items make ideal gifts for relatives, friends and neighbors. For more information regarding these publications, please contact the Landmarks Society at (415) 435-1853. Shipping & tax not included.

In words and exceptional old photographs, many never before published, “A Pictorial History” tells the story of Belvedere since its founding by the Belvedere Land Company. The account includes Belvedere’s incorporation, the arks, the heyday of the Belvedere Golf and Country Club and the Belvedere Hotel, the Night in Venice celebration, the changing face of Beach Road, the development of the lagoon and Corinthian Island, the community’s celebrations and controversies, its institutions and social life, a roster of its leaders, and an interesting study of its eclectic architecture.

Also included is a reprinting of “Island of Six Names,” or Belvedere pre-1890 by historian Louise Teather.

Collector’s Item for railroad and maritime buffs, not limited to local interest. Detailed captions tell history of the peninsula and islands. 248 black and white photos, end paper drawings of 1884 ferryboat. 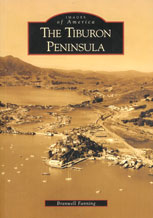 This book tells of Marin County’s spectacular Pacific coast. Although noted as one of the most beautiful locations on Earth, Marin was also a place of absolute terror for some early mariners. Filled with fabulous pictures, read about how this rocky coast has claimed hundreds of ships and the lives of thousands of sailors.

Another part of the Image of America series, Marin County describes the largest Bay Area County known for its beautiful woodlands, seashores, and hills. The County’s towns, people, and architecture tell an equally compelling story. Filled with illustrations, this book is a pictorial history of Marin County.

This book is a pictorial history of The Northwestern Pacific Railroad – The Redwood Empire Route. The amazing images illustrate how a 570-mile backbone of steel helped create and shape the northern California counties of today. 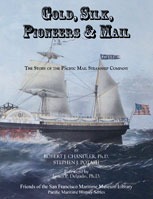 This book tells the story of the venerable San Francisco line that operated the SS China (of which the China Cabin was a component) in the world’s first regular trans-Pacific steamer service, starting in 1867.

That was the start of today’s rich trade with the Far East and brought waves of immigration. Both forces changed San Francisco, the Bay Area, and the Pacific Basin forever. The book goes back to the company’s role in bringing miners to the California Gold Rush via Panama, and features passenger letters and anecdotes about side-wheelers such as the SS Tennessee (that ran aground in 1853 at “Tennessee Cove” in Marin County). It brings the 160-year history current through succession to the Dollar Line in 1925 and American President Lines (today’s APL) in 1938.

With more than 60 illustrations, the book is published by Friends of San Francisco Maritime Museum Library (Glencannon Press) in a limited edition. Landmarks Society has been designated the “official supply depot” for this book, which was launched at our China Cabin on Opening Day of the 2008 Season.

Both Sides of the Track, A Collection of Oral Histories

Remembrances of 22 old-timers representing a cross-section of the early families who settled on the east and west sides of the railroad tracks. Stories not to be found elsewhere. 130 black and white photos, 211 pp, 8×10, 1985.

The story from mission church to historic landmark: Reed family and railroad connections, life of the mission, rescue and restoration, miracle of the wildflowers. 12 photos, 16 pp, 6×9, 1988.

Story of Rose Rodriques de Fonta Verrall and her association with the Reed family; first printed in 1963 on the occasion of her 80th birthday and reprinted in 1983 on the occasion of the centennial celebration of her birth in thanksgiving for her legacy to the community: The Richardson Bay Audubon Center. Also an account of the Lyford House. 4 black and white photos, 12 pp, 5×8.

Compiled by James A. V. Moore

Essential guidebook for the lay person interested in identifying and locating all ferns and seed-bearing plants in the wildflower acreage. Illustrated, 4pp, 6×9, 1972, revised edition 1984.

A Garland of Wildflowers from Old St. Hilary’s Preserve

Color photos of plants from the John Howell Botanical Garden presented in the order of blossoming. 17 color photos, 14 pp, 1973.

Flora of the Tiburon Peninsula, A Historical Record

Comprehensive reference to the diversified native vegetation and related geology of 6 sq. miles of the peninsula, its shoreline and marshes. Illustrations, maps and photos, 74 pp, 1963.

This is a collection of favorite recipes published in celebration of the Landmarks Art & Garden Center. The recipes were selected from chefs and caterers of renown to supplement the contributions of local cooks. The book is divided into sections marked with drawings by local artists.